Currently, Bailey is loving llamas and we threw her a llama birthday party last year. Knowing that this might be a passing phase I was not keen to follow through with this theme for her new pre-teen bedroom in Hünenberg. But as I ended up buying a few cute accessories for her party, I decided to challenge myself and see if I could create this look in her current bedroom for the next few months that we live here in the old house with minimum spend and effort. Here is what I did.. 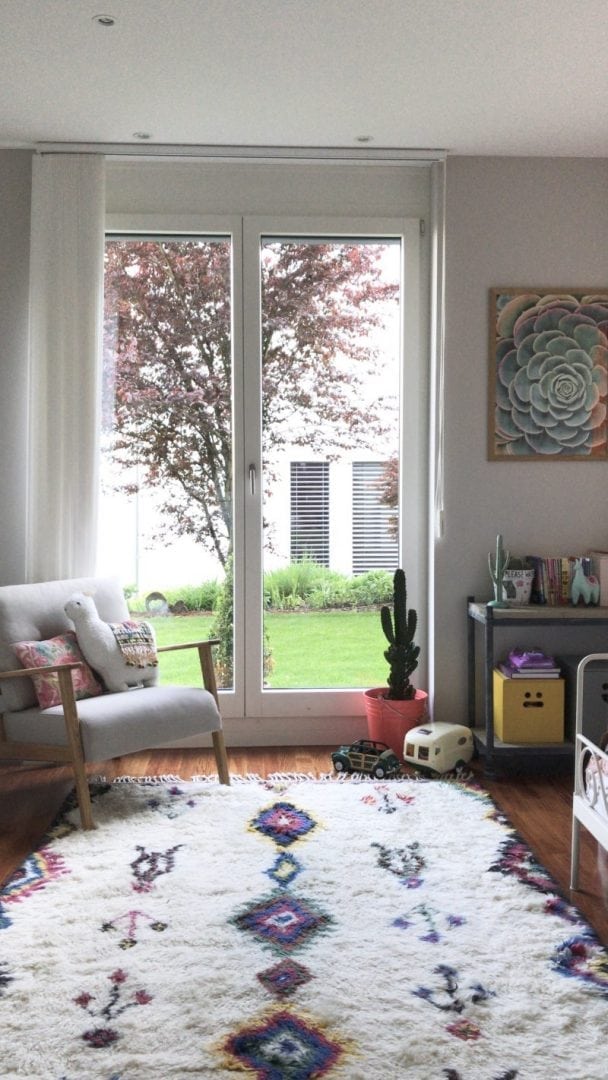 THIN IT OUT First of all, I tossed and donated all of the old furniture we are not taking with us to the new house except her single bed as she still needs that for the next 6 months. It was so freeing to clear it all out. That pretty much only left her Swiss Made chest of drawers – as out went her IKEA wardrobe, shelf, bookcase and bench. The room then looked different but also a bit empty, so I borrowed a short shelf from Liam’s gym room and added in Zara’s new bedroom chair that I ordered for the new house. Now it looks move liveable but not too overwhelming. 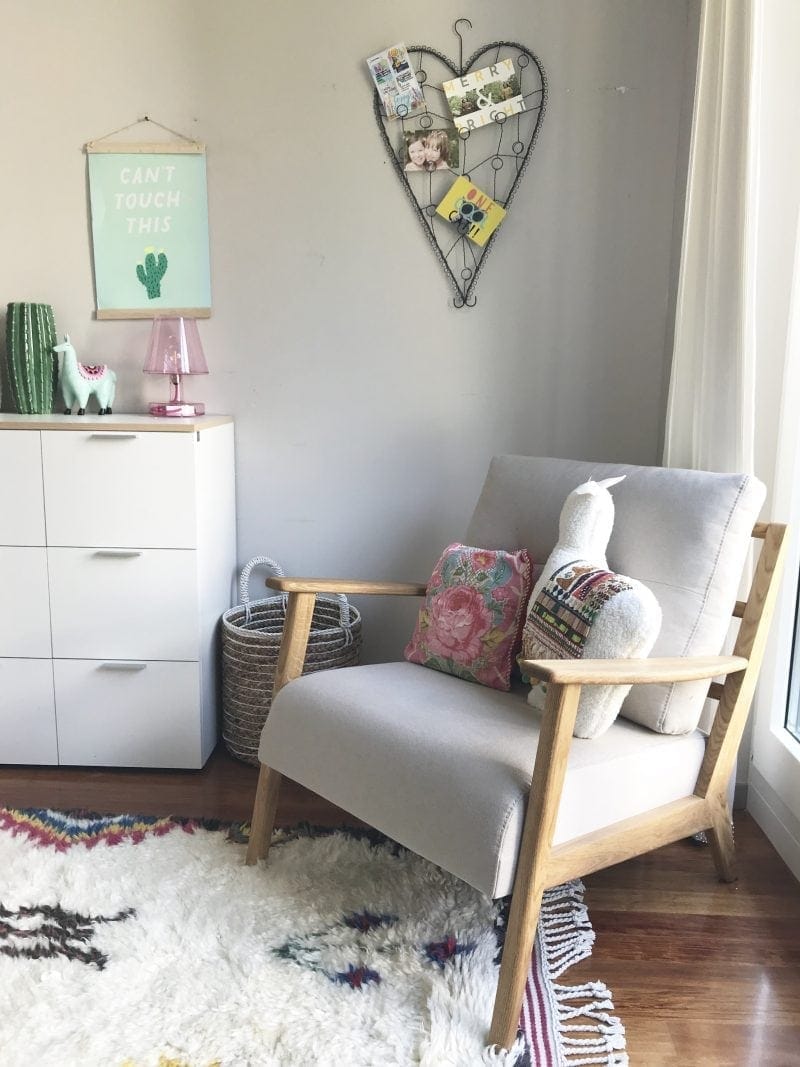 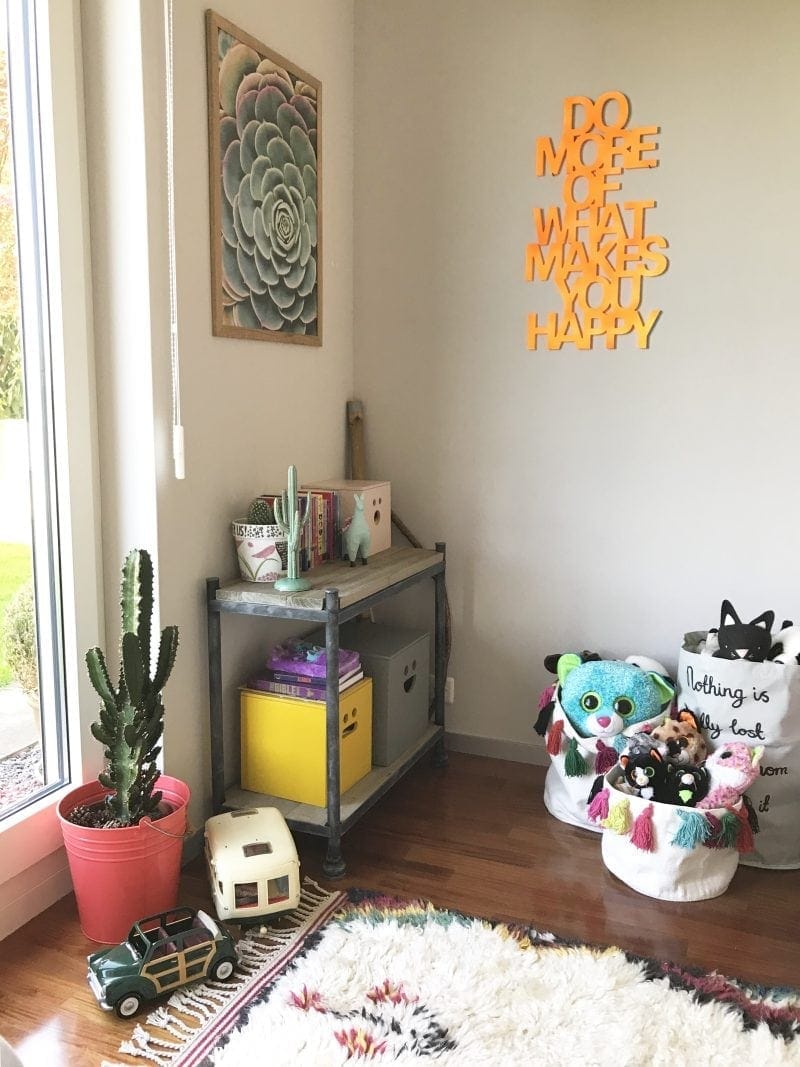 STEAL FROM OTHER ROOMS I then bought some inexpensive accessories that are actually not for her but for a a bathroom in the new house, and they are now “resting” here for a while: the little wooden stool (Migros Do It and Garden) acts as bedside table and a wooden round mirror (HM) above the drawers. 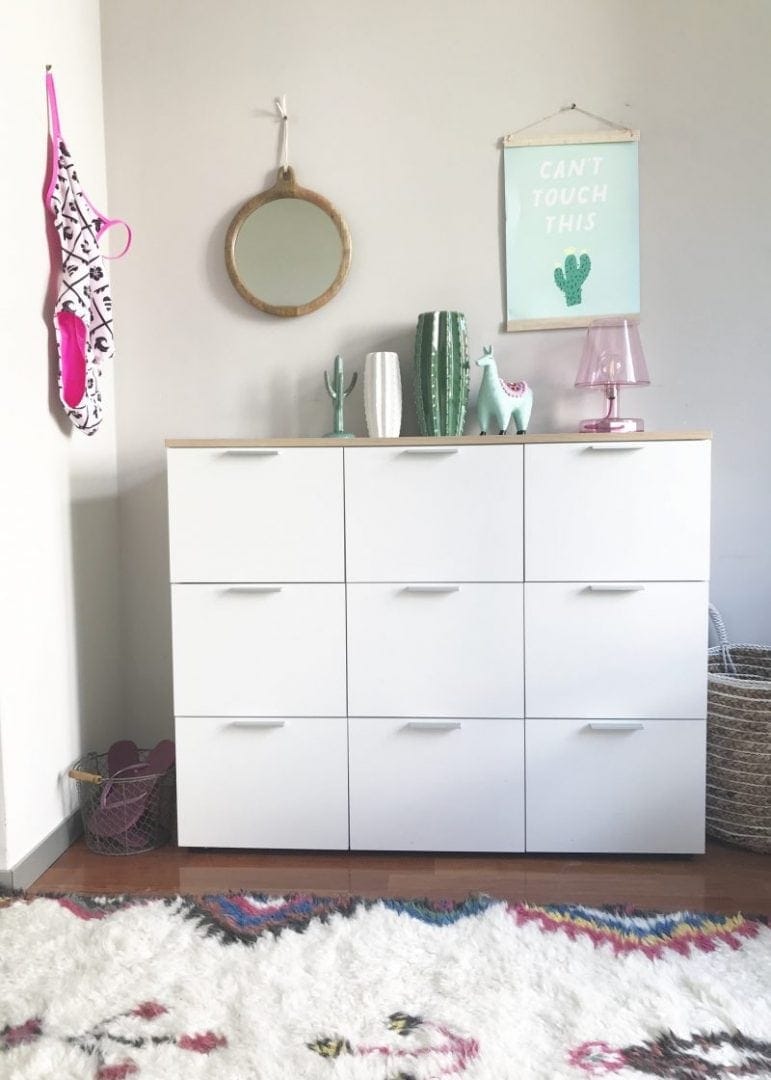 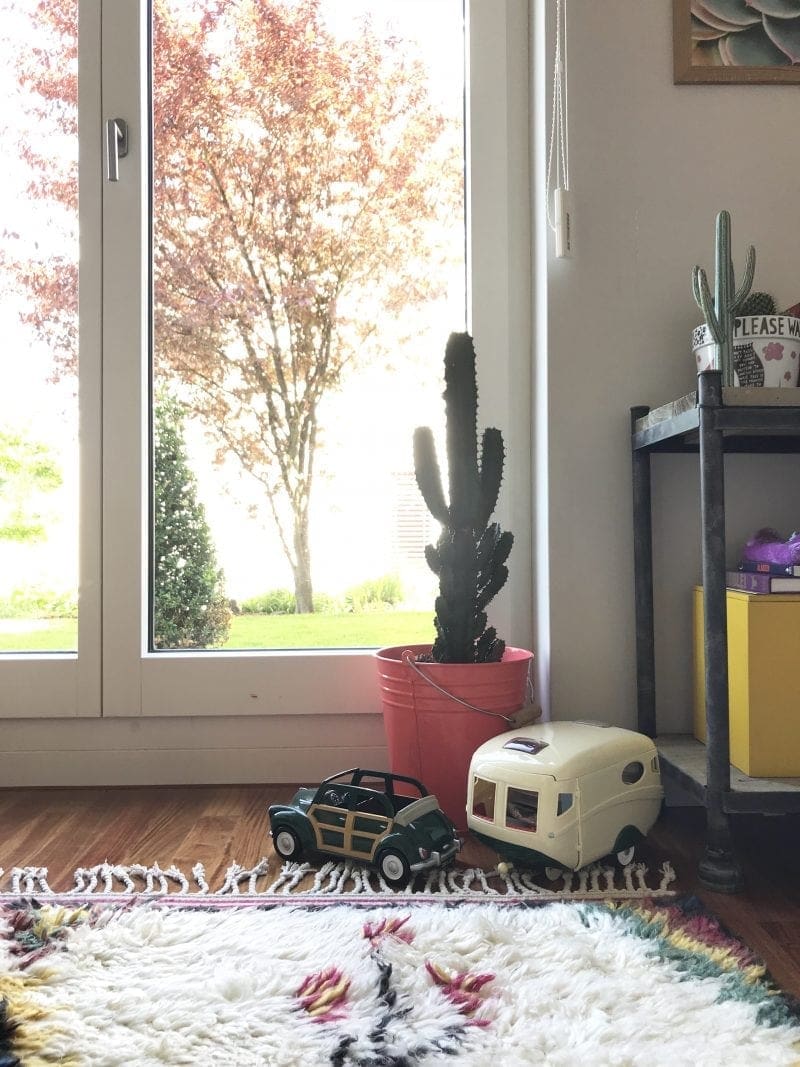 MAKE A THEME OF IT To make her llama dreams come true, I put on display all the goodies that I used for her Llama party: cacti posters, cacti plant, cacti vases, little Llama money banks – and naturally her birthday present of a giant Llama soft toy sets the theme. I then realised I had three framed cacti pictures in the girls’ bathroom, so I moved them into her room instead as they definitely work better in here. (Do check out the bathroom post later that shows the quick solution I did there). 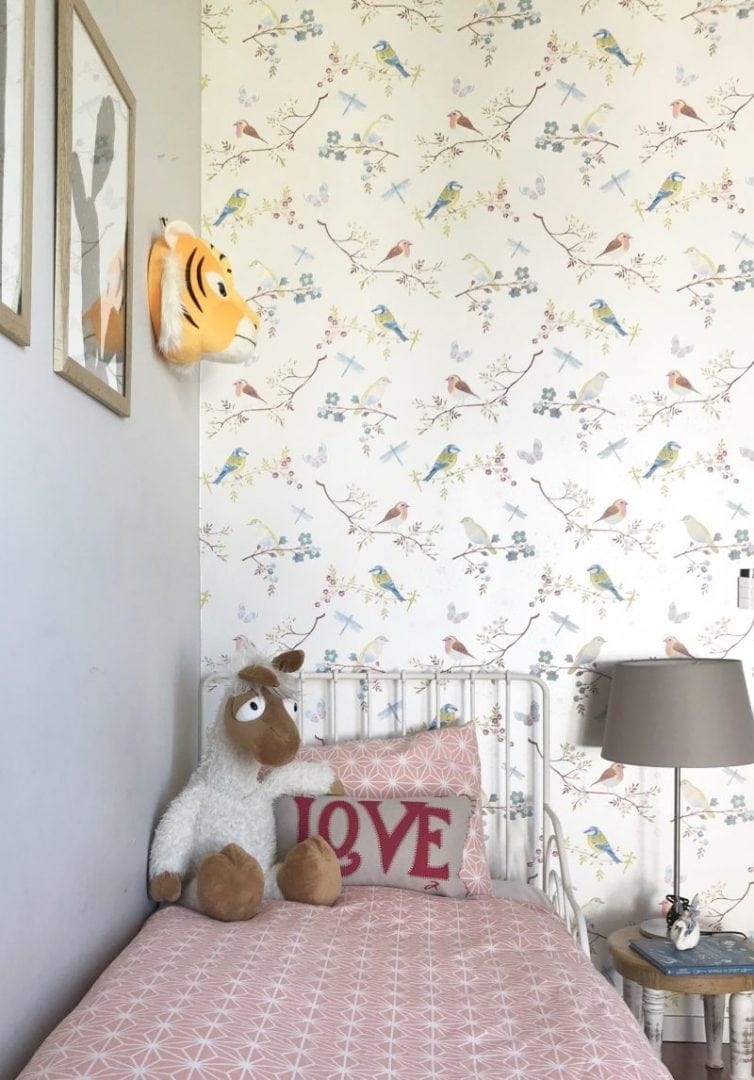 TO BUY OR NOT TO BUY? I eventually invested in a new amazing Berber Rug for the bedroom. I wasn’t going to buy it just yet, as it was quite expensive (from Interio) but everytime I walked past her room I dreamt of it on the floor. So when Interio had a 20% off sale I decided that I just had to get it as I had been thinking about it for too long now and I knew for sure it would look awesome. Plus: I have not found any other option for her new room since and I know she will have it for many, many years to come. I can already think of two other places it can go in case her wishes change years from now. 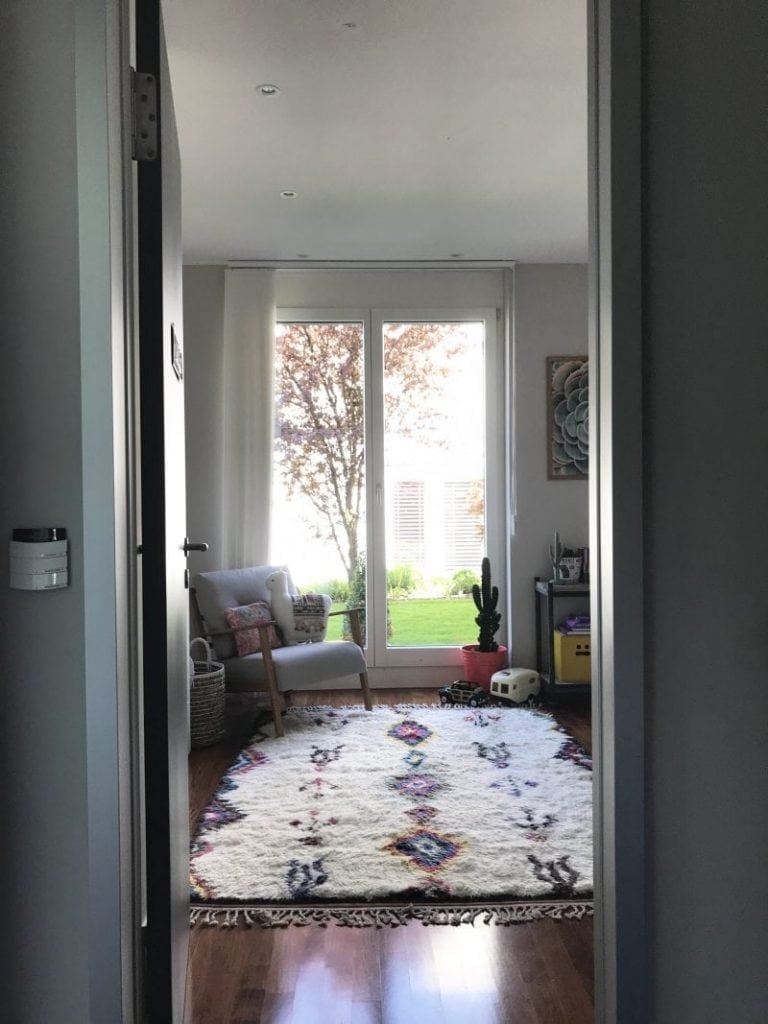 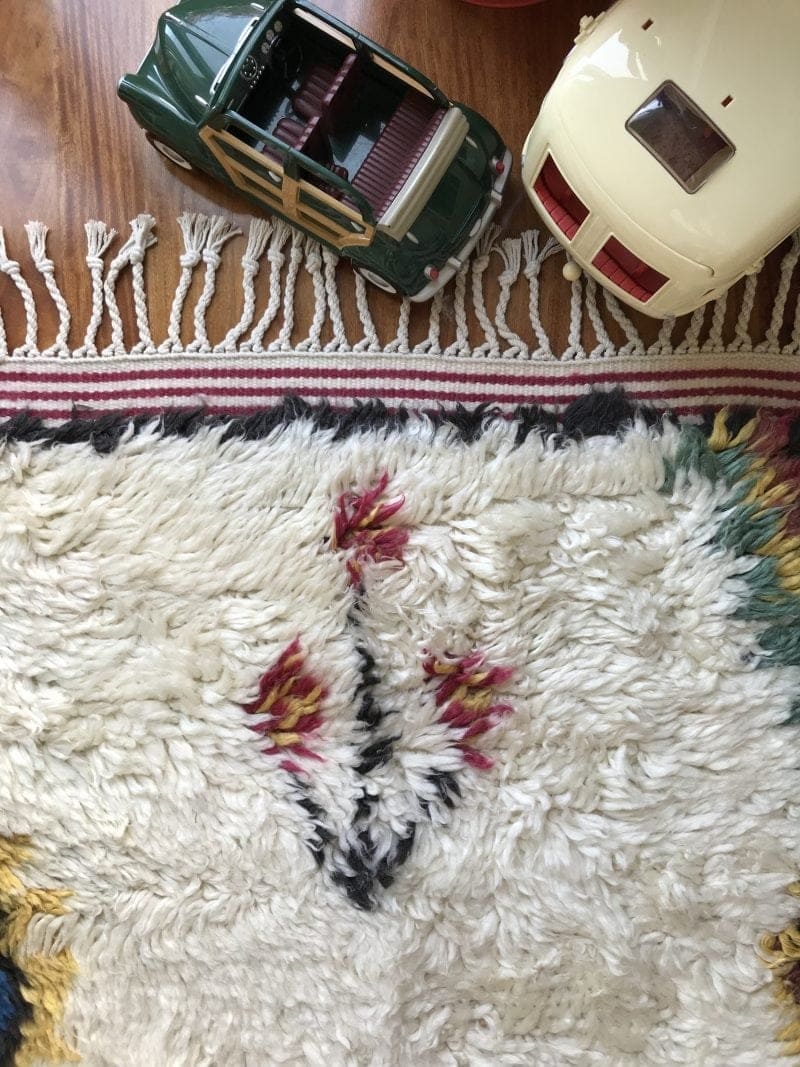 KIDDIES WALL ART IDEAS The walls still had nails from the old pictures I had up, so for some quick wall solutions, I used an old wire heart on the one hook to display photos of Bailey and her friends. The cacti art I stole from the bathroom which was just store bought frames and prints from IKEA. The tiger wall hanging was a great buy from HM Home (I remember years ago these were only being made by designer stores with designer prices!). I actually have a Llama one but it is deep, deep inside one of the boxes I have already packed. So for now the tiger one lives here in the “Desert” room and the llama will go in the “Jungle” room until I get organised! And the word art is actually a white one I sprayed neon orange a few years back for my old Zug shop. So many people wanted to buy it, so I am thrilled to see that Depot still sells the same sign and just with a can of spray paint you can transform it to match your room perfectly. 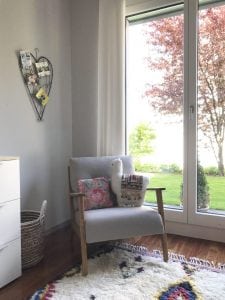 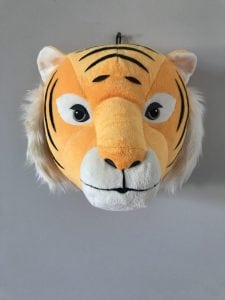 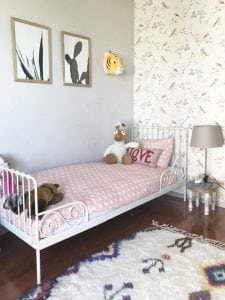 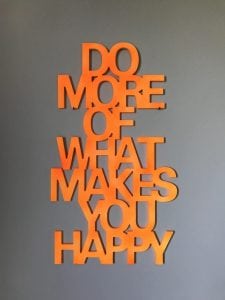