When we first arrived in Switzerland it was the last week of November, and therefore not even being in Switzerland a month I encountered one very important Swiss tradition. And it came as an initial shock!

It was early December, and I remember it was already snowing that year and Liam and I were walking slowly along the sidewalk only to bump into what I described then as “Evil Santa” and I screamed! I did not know that this man wearing a dark brown suit with black trim and a face covered in black soot and lard was in fact Samichlaus’ sidekick Schmutzli!

Schmutzli and his history varies, but according to Wikipedia, Samichlaus was all about rewarding the good kids and Schmutzli was the enforcer who punished the bad. He used to carry a whip and when the large sack of goodies was empty, Schmutzli could use it to stuff naughty children into and then kidnap them. These days he just helps Samichlaus distribute the treats and doesn’t say much… but need less to say I find quite intimidating! 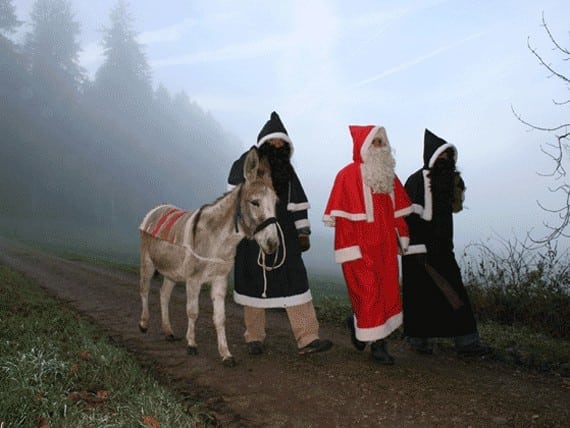